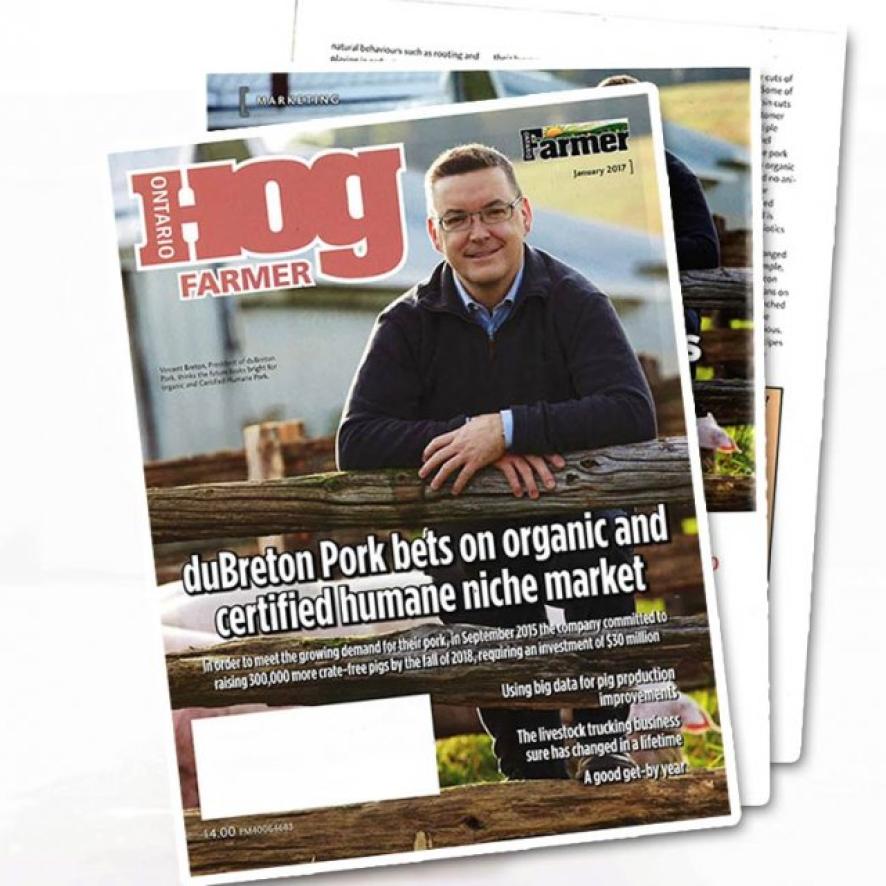 In order to meet the growing demand for their pork, in September 2015 the company committed to raising 300,000 more crate-free pigs by the fall of 2018, requiring an investment of $30 million.

The future is bright for the organic and Certified Humane pork niche markets. That's according to Vincent Breton, President of duBreton, a North American leader in the production and processing of ethically-raised pork, who thinks supplying this niche market could help save the family farm.

'A portion of consumers are concerned about what they are eating, where it came from and how it was raised," says Breton. "l think this trend will continue to grow" he adds.

According to Breton, about one quarter of the pork they sell is produced on their own farms. The other 75 % is produced by a network of about 300 family farms in Ontario and Quebec. By providing a niche product, Breton says family farms can avoid the challenge of competing with big corporate factory farms.

ln order to meet the growing demand for their pork, in September 2015 the company committed to raising 300,000 more crate-free pigs by the fall of 201 8, requiring an investment of $30 million. Breton says the company welcomes inquiries from independent farmers willing to embrace the Certified Humane or organic models.

The Certified Humane principles aim to allow the animals to engage in natural behaviours such as rooting and playing in order to reduce stress and improve animal comfort. Pigs are raised on bedding. No crates or antibiotics, are used.

While Breton admits that meeting third-party certification standards is a big investment, he says it is worth it because it gives the consumer confidence in the product.

DuBreton Pork worked closely with the Whole Foods specialty grocery store chain in developing their production practices. "We adapted ourselves to industry leaders like Whole Foods," he says, adding that duBreton was the first company in Canada to qualify for the Certified Humane status.

There are many different types of certification but Certified Humane is one of the ones required by Whole Foods, says Breton. "Certified Humane has some traction in the industry in the US and Canada," he adds.

Now duBreton is going beyond the specialty stores, selling their meat through the big grocery store chains, including Sobey's, Metro, lGA, Loblaw's and Longo's in Canada and Costco in the US. Breton points out that all of the big chain stores now dedicate part of their store to organic products.

ln total there are .1000 points-of purchase for duBreton Pork in North America. DuBreton also supplies Chipotle's Mexican Grill, a restaurant chain that promotes their commitment to sustainability and animal welfare.

DuBreton is a company with a long history. Vincent Breton is the third generation to lead the company which was founded by his grandparents, Napoléon and Adrienne Breton in 1944.Through the years, the business has grown and innovated, first by specializing in pork, then by adding feed mills, pork processing and value adding. ln the late 1990's they began making the switch to organic and humanely raised pork after one of their buyers expressed interest.

"DuBreton's main plant is in Rivière-du- Loup, Quebec. The company also has an artisanal bacon plant in New Hampshire. About 1200 people are employed in total.

Being in the organic and Certified Humane niche allows them to compete with the big US companies that are ten times their size, says Breton.

DuBreton's retail products include ham, bacon, sausage, pork tenderloin, ground pork, ribs and other cuts of pork under multiple labels. Some of the pork chops and tenderloin cuts come pre-marinated for customer convenience. They have multiple labels including the green label organic and Certified Humane pork which is raised sustainably on organic feed, with outdoor access, and no animal by-products, antibiotics or GMOs. Their blue label Certified Humane Rustic Farm Pork label is raised crate-free without antibiotics or animal by products.

The company uses a multi-pronged approach to marketing. For example, in conjunction with National Bacon Day, duBreton surveyed Canadians on their bacon preferences and launched a social media campaign using the Twitter hashtag #duBretonDelicious. Cooking videos and dozens of recipes are also available on the company website.